In this article, we will go over cognitive biases that can make it difficult to stick to a momentum-based trading strategy. These include the disposition effect, anchoring bias, and overconfidence.

This content should help you prepare for the cognitive dissonance you may experience while running Trendbot and Marginbot. Furthermore, it should provide you insight as to why not everyone tries or sticks to a momentum based strategy, despite the overwhelming evidence and research that indicates it is a profitable trading approach.

This common bias is based on the observation that people dislike losing more than they like winning. For example, the negative emotions associated with losing $100 is greater in magnitude than the positive emotions of winning $100. As a result, traders tend to hold onto their losing trades longer in hopes they become winners, and are quick to sell their best-performing assets to lock in the win.

Momentum-based trading strategies assume that when a coin has been performing well, it will continue to perform well – at least in the near future. As Trendbot or Marginbot apply this strategy, the disposition effect may take over and urge users to protect their wins, selling out early when it has been doing well.

On the flip side, traders may desire to hold onto losing trades far longer than a momentum strategy would. As a momentum based approach would sell out of losing positions early to protect from further downside. This effect was evident in the 2018-2019 crypto bear market, when market participants held onto their losers to avoid the pain of realizing the loss, instead of selling to protect themselves from larger losses.

Anchoring is a cognitive bias in which traders rely too heavily on the first information they receive, and therefore “anchor” their thoughts based on this irrelevant reference point.

This bias is likely to be triggered in a rapid drop in prices. If a trader first notices Bitcoin at $10,000 and associates that with fair value, they naturally may see a drop to $8,000  as a discount.

The momentum trading approach would sell that asset if it was holding positions because it assumes the prices will keep dropping. A trader falling victim to anchoring bias may see this as a discount and decide to buy.

As a user runs Trendbot and Marginbot and notices the bots aren't picking up these “bargain prices”, they may become frustrated and stop the bot to make the purchase. 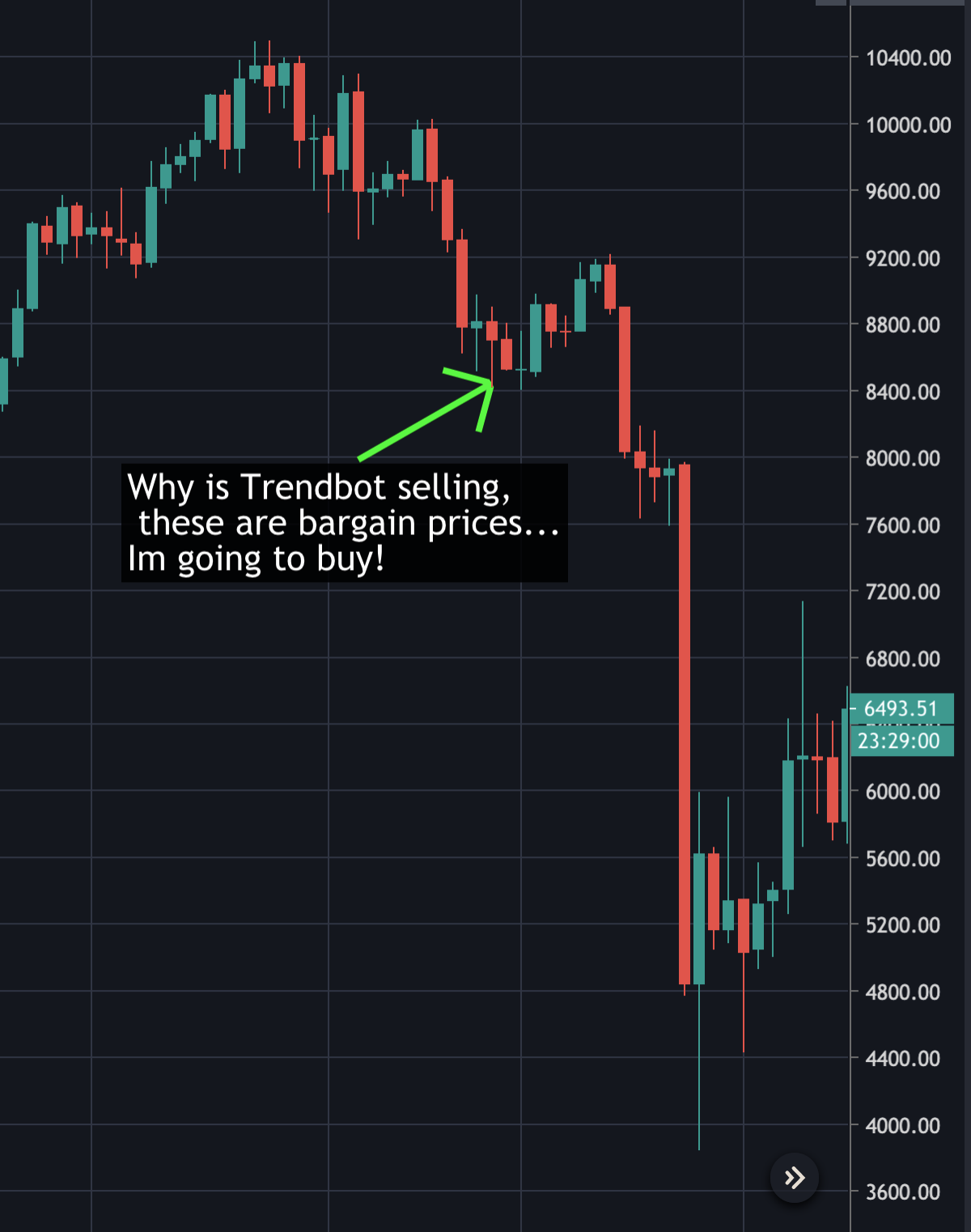 This bias is based on that fact that many traders overestimate their trading and investing abilities. If you asked a group of traders if they think their trading abilities are above average, a strong majority will raise their hand, but of course this cannot be the case.

Momentum strategies do not try to sell at the absolute top of a trend, or buy right when the trend reverses. Instead, it waits for confirmation of such trend changes. This gives room for uncalculated risks, as overconfident traders may try to go against a proven strategy. 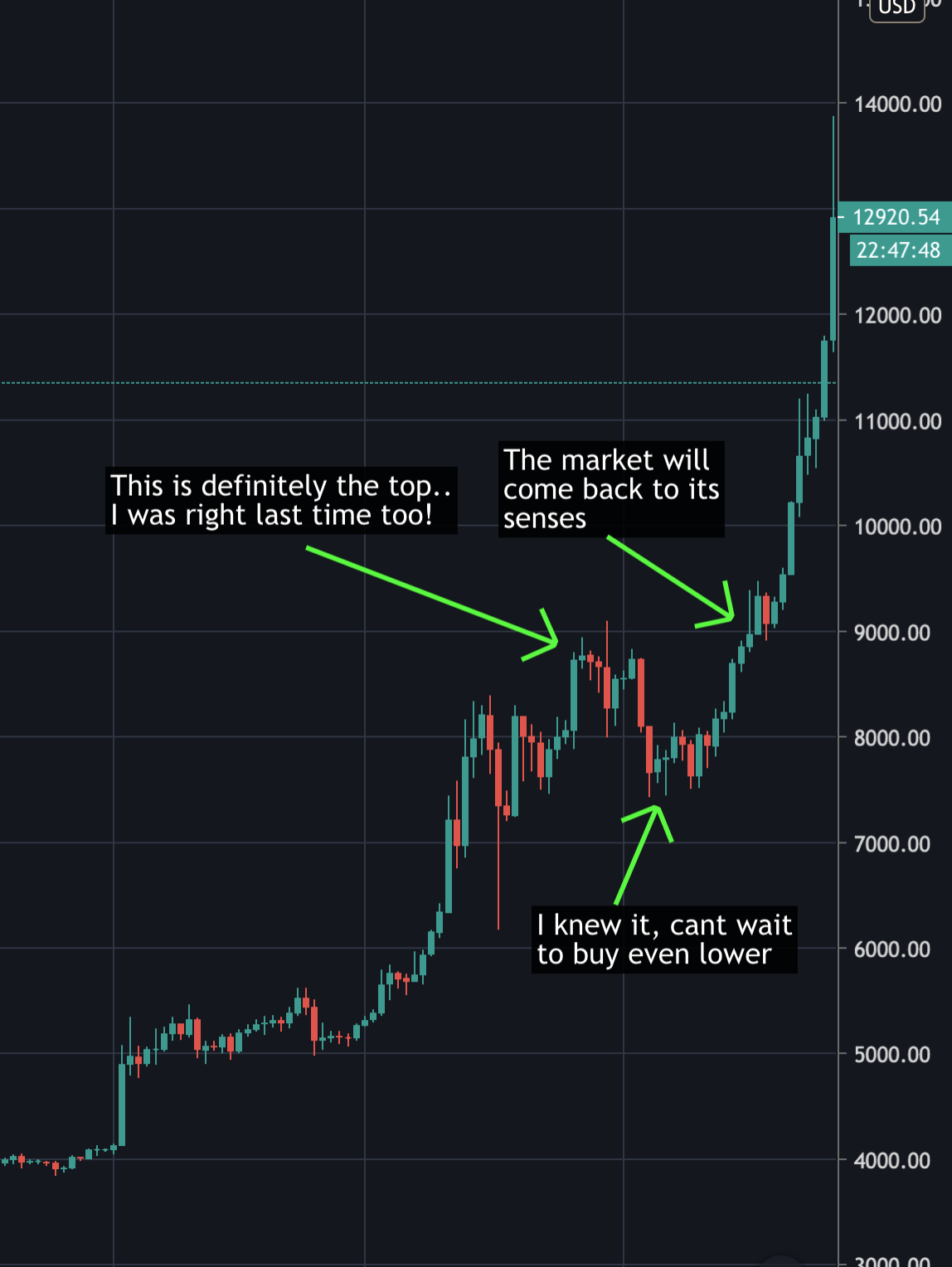 Despite trend-trading being a profitable trading approach over time, there are human biases that get in the way. This may be why trend-trading has maintained an edge over the decades, even after being discovered. If it was easy to adhere to, everyone would do it and the edge would dissipate over time. Because this is an inherent part of human psychology, it is unlikely to change, and those who manage to stick to the strategy over the long-term are likely to be rewarded.